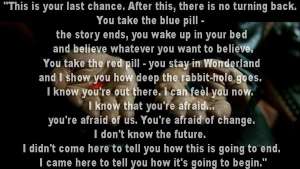 Have you ever seen the movie, The Matrix?  If so, can you see it around you now?  In the series, people live in a fantasy world, an alternate reality they create which is designed to keep them docile and in willing submission to the illusion.  This way, they do not wake up and revolt against their robotic slave masters.  Well, we live in such a world.  It’s true.  This is not a ‘conspiracy’ theory, nor is it an over statement.  I know it is true because the people who have created it said it is true.  What’s more, they explained how they would create it and, once you read what they have said and take a look around, you will see the evidence of their success all around you.  Only those of us who are in tune with the intangible aspects of this universe that the majority deny exists will ever sense there is something wrong with this illusion.  For them, they are content to live in the illusion.  They feel safe there.  Sadly, the more those who know there is something wrong try to wake up, the more they place themselves in grave danger.  You see, the system can’t afford for you to wake up; it either has to convince you to go back to the illusion…or it has to eliminate you.  That is the price of taking the red pill: the truth will set you free, but it may also kill you in the process.  So, do you want to see evidence that the illusion is real?  If so, I must warn you first: once you see it, there is no going back…

“Anyone who has begun to think, places some portion of the world in jeopardy.”

Why did Dewey say that?  Because anyone who is thinking for themselves has thrown off the shackles of whatever indoctrination he has been subjected to and is now a threat to the system.  So why should we care what John Dewey thought?  Because he was one of many men who designed the system of indoctrination that now permeates every aspect of our lives.  Dewey is the father of the modern American public education system – the same education system our ‘elite’ keep their children from attending by sending them to real schools, where they are educated and not indoctrinated.  Dewey matters because he was also one of those arrogant people who felt he could boast about what he planned to do and that the rest of us were to stupid to realize what he was saying or do anything about it.  On the latter count, it appears he may have been correct.  This is what Dewey did not want you to start thinking about for yourself:

“I believe that the community’s duty to education is, therefore, its paramount moral duty. By law and punishment, by social agitation and discussion, society can regulate and form itself in a more or less haphazard and chance way. But through education society can formulate its own purposes, can organize its own means and resources, and thus shape itself with definiteness and economy in the direction in which it wishes to move.”

And what sort of society did Dewey envision as the ultimate goal for humanity?

The Russian educational situation is enough to convert one to the idea that only in a society based upon the cooperative principle can the ideals of educational reformers be adequately carried into operation.”

You see, Dewey was a Secular Humanist.  He thought man was his own god and that the teacher is the prophet of this new humanist religion.  Through education, man would create utopia on earth.  Don’t doubt me; just take Dewey at his word:

The teacher is engaged not simply in the training of individuals, but in the formation of the proper social life…. In this way, the teacher always is the prophet of the true God and the usherer-in of the true Kingdom of God.

This same thing happens all throughout our society.  It is nothing more than the embodiment of what Hitler called for in NAZI Germany when he was trying to create his master race:

In relation to the political decontamination of our public life, the government will embark upon a systematic campaign to restore the nation’s moral and material health. The whole educational system, theater, film, literature, the press and broadcasting – all these will be used as a means to this end.

Do you still believe in individual rights and liberty?  Well, if you do, that is the ‘political contamination’ Hitler – and Dewey – wanted to rid from society.  So understand: everything in your daily life – your news, your TV shows, your music, your books, your movies – all of it is designed to shape and direct your actions.  From the moment we can understand television, we are being programmed to be ‘accepting’ of these messages: to just take them on face value and never think about what they actually mean.  This process then continues throughout our entire lives.  We are all being indoctrinated every day, and anyone who starts to wake to this fact upsets the system and has to be ‘dealt with.’

Now, suppose you are part of the ‘elite’ who are designing this system.  You have vast resources, but even those have limits.  So what do you do to help make sure that, once a person is indoctrinated to a certain point, they stay indoctrinated?  Well, the first thing you might do is set up a hard boundary within which you leave people to act as they will.  This provides them with the illusion that they are free, thereby helping to gain their willing participation in their own enslavement.  But you need to create harsh penalties for those who might seek to go outside these boundaries.  For those people, you need a system where the majority who has accepted the illusion will do your work for you by ostracizing the ‘boundary breakers.’  Can you think of anything in our society that fits this description?  Does political correctness comes to mind?  So, how do we know this is really what they have done, and that they did it for this purpose?  Remember when I told you they have said so – if only you know where to look?  Well, I know where to look:

At any given moment there is an orthodoxy, a body of ideas which it is assumed all right-thinking people will accept without question. It is not exactly forbidden to state this or that or the other, but it is “not done”… Anyone who challenges the prevailing orthodoxy finds himself silenced with surprising effectiveness. A genuinely unfashionable opinion is almost never given a fair hearing, either in the popular press or in the highbrow periodicals.

–George Orwell (one of the founding architects of this illusion)

But how might you ‘arm’ the majority so they can keep the rest in line?  Well, Jonah Goldberg actually hit on the answer in his book, “The Tyranny of Cliches,” though he didn’t quite put all the pieces together.  In a nutshell, it works like this:

As a student goes through school and later, in his entertainment and social media, you teach him set response patterns.  These can be and often are what we call clichés.  By programming the individual to respond in clichés, you relieve them of having to think for themselves.  At the same time, you also relieve them of having to understand whatever issue it is to which they may have to respond.  When done properly, it works like this:

Thinker: “Well, we all have to judge other people’s actions or society will fall apart.”

Drone: “Well, have you ever thought that what might be right for you might not be right to someone else?”

Once the individual has been successfully indoctrinated, it becomes nearly impossible to extricate them from their illusion.  They naturally think they are smarter than those who think for themselves, and nearly anything you try to explain to them will be turned into a confirmation of this assumption.  And if you can manage to get them to start thinking for themselves, they quickly realize they are nowhere near as smart as they have been told and believed, which leads to a feeling of insecurity, which breeds aggression which finally triggers the ‘self-defense’ mode and you are attacked as a “RACIST, BIGOT, HOMOPHOBE!”

Now do you see the Matrix?

3 thoughts on “PIECES OF THE PUZZLE: The Role of ‘Self-Protection’ in the Process of Indoctrination”