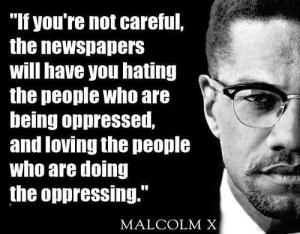 This post is just a quick follow-up to a previous post, Historic Revisionism: The Real Reason Democrats Want Blacks ‘On Their Plantation.’  When I saw this story, I realized it is the perfect companion to my first post because it illustrates how violently the political Left attacks any black who dares to step off the Democrat Party’s ‘plantation:’

Black Actress Lays Into Oprah Over Trayvon Martin, Emmett Till Comparison: ‘Shame on You’

Dash burst onto the political scene during the 2012 presidential election when she came out against President Barack Obama and pledged her support to failed Republican candidate Mitt Romney. Dash was viciously attacked on Twitter for supporting a Republican. TheBlaze’s story outlining the so-called controversy remains the third most popular story in this site’s history. Read it here.

This is why we must know and understand history: because, if we don’t, then we will end up exactly where Malcom X said we would.  However, this only works if they can keep you ignorant and afraid.  But once you know the facts, and the Truth, and you find the courage to stand up to those who seek to deceive you, then you will be free — and not until.

20 Wo [to] those saying to evil `good,’ And to good `evil,’ Putting darkness for light, and light for darkness, Putting bitter for sweet, and sweet for bitter.

21 Wo [to] the wise in their own eyes, And — before their own faces — intelligent!