This is another post intended mostly for Christians.  It is also a partial answer to a question/request from one of the people who have attended the Christian Apologetics class I teach at my church.  This post deals with one of many lies that the Church has accepted which have largely served to make the Church ineffective in its work for Christ.  In this particular case, the lie is that the rightful place for our faith is in church and nowhere else.  This is one of Satan’s most effective lies because it is 100% un-Scriptural!  Here is the story that prompted this post:

Precious 8-Year-Old Autistic Boy Brings His Bible to School Every Day – That Is, Until the School Told Him the Book Is ‘Only for Church’

A Dearborn elementary school reportedly told an 8-year-old boy with autism to stop bringing his Bible to class because the book is “only for church, not school.”

Let me say this plainly and clearly: this is a lie!  The Bible is meant to be lived in every aspect of the Christian’s life.  What’s more – whether they accept it or not — it has jurisdiction over every aspect of the non-believer’s life.  God reigns over all – period!  It’s called Natural Law, and it is mentioned throughout the Bible, but especially in places such as the books of Job and Romans.

The fact that Christians are to live their faith in every aspect of their lives is clearly asserted in ‘The Great Commission:’

19 Go therefore and make disciples of all the nations, baptizing them in the name of the Father and the Son and the Holy Spirit, 20 teaching them to observe all that I commanded you; and lo, I am with you always, even to the end of the age.”

Just use your common sense: how do Christians obey this command if they confine themselves to the Church?  Christ said that those who are well do not need a doctor; that we must go to where the sick are.  That means we must carry our faith out into the world.  This case is made fairly well in the book, “Myths, Lies & Half-Truths,” by Gary Demar.  While I am not going to go so far as to endorse everything the author asserts, I do believe he makes a powerful argument against this and other lies, myths and half-truths that the Church has accept and which have made it largely ineffective as a servant for Christ.  I would urge you to read it and decide for yourself, but read it and test it against the Spirit.  I think you will find he is on fairly solid ground.

The next thing you need to understand is that there is no separation of Church and State:  that is, not in the sense that we understand it in our society today.  It is not in the Constitution.  What’s more, the Bible was not only the first school book in public education in this nation; public education was established in this nation for the specific purpose of teaching people how to read so they could read the Bible for themselves.  Stressing the individual’s relationship with God was central to the Protestant movement and the reformation.  It was this movement, and its emphasis on the need to make it so the individual could read God’s word for themselves is what drove the creation of general education for all.  Christians were responsible for eliminating illiteracy, and they did it so people could read the Bible.  Research it for yourself.  You’ll find this to be true.

“Education is thus a most power ally of humanism, and every public school is a school of humanism. What can the theistic Sunday school, meeting for an hour once a week, and teaching only a fraction of the children, do to stem the tide of a five-day program of humanistic teachings?”
–Charles F. Potter, Humanist

Likewise, if you do the research for yourself, you will find that this nation was founded upon the general principles of Christianity, and that our founders in no way intended for our government to be ‘secular.’ This is yet another lie.  I have written about this many times.  Here are just two posts dealing with this issue:  AGENDAS: Those Who Deny The Role Of The Judea/Christian Ethic In The Founding Of America and POUNDING HOME THE POINT.   Please, if you have not already done so – especially if you doubt my assertions in this post – read these other two pieces.  You will find the record filled with words from our founders (and those who immediately followed them) such as these:

“The real object of the [First A]mendment was not to countenance, much less to advance, Mahometanism, or Judaism, of infidelity [Atheism], by prostrating Christianity; but to exclude all rivalry among Christian sects [denominations].”

–Supreme Court Justice Joseph Story, 1811-1845, from his “Commentaries of the Constitution of the United States”

Benjamin Rush, one of the most important of our founders, and one who has been hidden from your knowledge of our history for obvious reasons, was strong in his advocacy of including the Bible in public schools: A Defence of the Use of the Bible in Schools.

“Surely future generations wouldn’t try to take the Bible out of schools. In contemplating the political institutions of the United States, if we were to remove the Bible from schools, I lament that we could be wasting so much time and money in punishing crime and would be taking so little pains to prevent them.“

–Benjamin Rush, signer of the Declaration, member of Continental Congress, founder of 5 universities, in a “Defense of the Use of The Bible in Schools”, 1791;

The founders came out of a long history of Protestant reformation and revival.  They understood that Scripture commands us to live our faith in every aspect of our lives – even into civil government.  They knew Scripture actually speaks to matters of civil government and how God expects it and our leaders to function.  They expected this to extend into our own government.  So, for them, the government they were making was never considered to be ‘secular’ because they expected that the people would be electing Christians and those Christians would be living their faith in the way they executed their duties within the government.  In fact, they were depending upon this to sustain this nation.  Again, read what the founders wrote (not what history books say they wrote: find their actual words).  You will find this to be true.  A good start can be found with this book, which heavily quotes the founders: 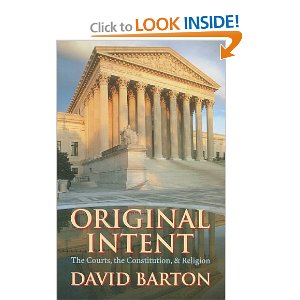 In the simplest of terms: when it comes to spiritual matters, you are either with God or against Him.  There is no neutral ground.  So, if you accept the lie that your faith only belongs in Church, then you are giving the rest of your life over to God’s enemies.  Now how do you suppose we can ever call ourselves by His name if we willingly give everything over to Satan?

One thought on “TRUTH: Christians who accept this Lie Disobey Christ’s Command”