The drum-beat from the Statists to ban private ownership of arms – not just firearms, but all arms – is directly connected to their desire to control you.  Now I see they are trying to use the Trayvon Martin case to claim that the private ownership of arms is no longer necessary to the security of a free state.  Nothing could be more of a lie, and yes, the claim that we do not need weapons in the hands of private citizens to be free is a lie.  So, once again, it’s time for a little history lesson.  Let me tell you about the battle of Athens, Tennessee:

The Battle of Athens is not something you will probably hear about in any public school system.  That is because it clearly demonstrates why the 2nd Amendment is crucial to a free society and that, without it, there will be no freedom.  In a nut shell, here’s what happened:

Athens, TN was a region that had long been dominated by corrupt and crooked politicians – especially the Sheriff.   In 1946, our veterans had just come back from serving in WW II.  Some 3,000 GI’s lived in the area around Athens, and they got together to challenge the corrupt system.  They told the people they had just fought to free Europe, and now, they were going to fight to free their home town.  But the local Sheriff and the corrupt political figures tried to interfere with the election.  They went so far as to lock themselves – with the ballot boxes – in a county building and to fire on the crowd that gathered outside to demand a fair counting of the ballot.  The rule of law was ultimately restored when these combat veterans – Patriots all – used their privately owned weapons to force the corrupt sheriff and political figures to surrender the ballots and obey the State laws.

This is why you do not hear about this incident: because it clearly demonstrates that government is a natural enemy of liberty and that the only sure defense against tyranny is for the people to be armed as well as the government is.  It shows that, if they have the means to do so, private citizens can and will defend their liberty, but if deprived of their arms in the face of government aggression…  Well, in that case, this is what happens: 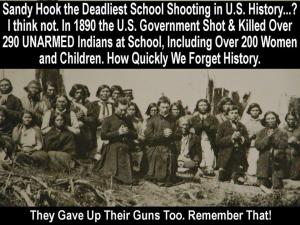 Here is a little more historic information the gun-grabbers want to keep from you:

See what happens when the people are allowed to carry their personal weapons?  Crime goes down — every time.  World murder rates bear witness to this truth: 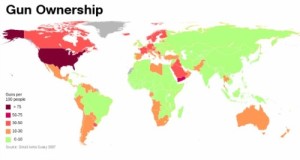 You never hear about this stuff because the people who want to control you have to keep it from you.  These would-be tyrants are not strong enough to just take our weapons — yet.  That will soon change, and that is largely what the closing of the lead smelting plant and government purchases of small arms ammunition is all about.  But — for now — their best chance is to convince you to surrender your rights.

This is why you never, ever surrender your weapons to the government.  Once you do, it is only a matter of time before you will be made a slave to that government.  You have a Natural Right to self-defense — even against the government (when it violates the rule of law, the government ceases to be legitimate and becomes an unlawful aggressor).  Anyone who claims otherwise is either a naive fool…or one of those who wants to control and rule over you.

Since the start of the Progressive era, they have been able to convince ignorant people to willingly give up their rights.  They have no reason to believe it won’t work again this time — unless you take it upon yourself to spread the word and educate your family and friends.  SPREAD THE WORD!

4 thoughts on “AGENDAS: The Battle Of Athens – Tennessee!”