When I saw this meme on Face Book, I wondered to myself: how many people will think this is just ‘hate speech’ by some ‘right-winger’ without ever knowing that it expresses an absolute fact?!

That is correct: there is fact behind this meme.  The fact is that protesting is a job for many of these people, and they are usually paid through our welfare programs.  This is not by accident.  It is by designs.  How do I know?  Well, this is why I listen to Glenn Beck: because, without him, I would have never connected the dots enough to see the hidden hand behind these protests.

Back around 2008, Glenn Beck told his FOX News audience about a book that was banned in France and many of its authors were jailed.  The title of the book was “The Coming Insurrection.”

People should have paid more attention to this book, and to Beck’s warnings.  Why?  Well, look at the meme about the unemployed again and then consider this:

Starting on page 103 of “The Coming Insurrection,” the anonymous group that wrote it starts to describe their plan of action.  The first thing they do is declare that they are looking to establish Communism — as Marx described it.  Then they say to start by forming communes.  After this, they promptly admit they will need money.  How are they going to get it?  Not by working, but by “cultivating this necessary distortion toward fraud” (i.e. the welfare state – pg 104), and to share in it’s ‘innovation.'”

The point is to use welfare programs to “free up the most time for the most people.”  These people then become the army of their movement (pg 104).  After this, they tell their followers to “Plunder, cultivate and fabricate.”  They explain that this means what it says: make additional money for the cause as possible, and by any means — even theft (pgs 104-105). They go on to urge their followers to:

Travel to open lines of communication with other ‘believers’ (pg 109)

Remove all obstacles one by one (pg 110)

Do so anonymously, turning anonymity into an offensive weapon (pg 112)

Block the economy, the ability to do so being directly proportionate to the level of ‘organization’ among the followers (pg 124)

Now, if you are familiar with Saul Alinsky and his book, “Rules for Radicals,”

Then much of what is in “The Communing Insurrection” will already be familiar to you.  “The Comming Insurrection” is — essentially — a French re-stating of Alinsky’s book.  Alinsky is an old mentor of Hillary Clinton’s…and Barack Obama’s!

This is important.  You need to understand why these connections matter.  They matter because the people behind “The Comming Insurrection” stated their purpose, and it is the exact same purpose Alinsky and all American Progressives have sought: the same purpose the Fabian Socialists seek: to destroy society so they can rebuild it to suit their desires:

“The decomposition of all social forms is a blessing.  It is for us the ideal condition for a wild, massive experimentation with new arrangements, new fidelities.”

This is exactly what Woodrow Wilson wanted: massive social experimentation.  In short, the people behind this line of thinking want to play god; they want to see if they can ‘perfect’ society.  The problem is, their idea of perfection is always unique to themselves.  They seldom agree upon anything, even within their own little groups.  Whats more, for all their moral posturing, they haven’t the slightest concern for the destruction they cause.  They are quite content with the destruction their ‘experimentation’ causes.  In fact, there’s a French saying for this: “You can’t make an omelet without breaking a few eggs.”

Now, I want to share something else with you.  It’s another book.  The Little Blue Book: The Essential Guide to Thinking and Talking Democratic: 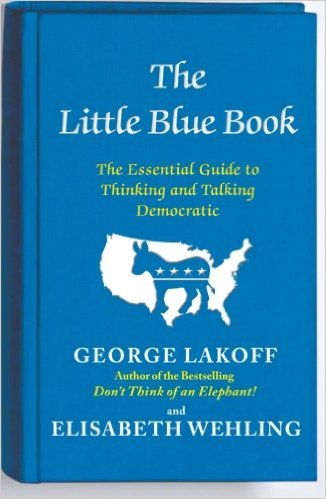 This book is an American version of the blue book, “The Coming Insurrection.”  The ideas are the same, they are just presented in a manner that is tailored for an American audience.

So, we have a meme that asks why the protesters don’t have time to get jobs.  We have a French book advocating that they feed their political armies by exploiting welfare programs.  An idea that comes directly from Alinksy and Cloward and Pivon (two more Progressive radicals connected to this agenda).  All of this is connected directly to Hillary and Obama, and to the people who do the thinking for the Democrat Party.  They even have a blue book about it, just like the French one.  And all of this goes back to Wilson and the American Progressives — the very people Hillary admitted she models herself after on national television.  This means that Hillary was telling you she wants to destroy society to remake it, and that she will use welfare programs to feed her army of protestors so they are free to push her political agenda.  It’s just that, unless you actually read all of these books, you will think this is all one big conspiracy theory — just like they taught you to believe.

However!  Once you do read these books, then they will never be able to hide from you again.  You will see their hand at work behind almost everything going on in the news today.  You’ll even know where to find the places where they actually explained the process and how they would make it happen. But you have to decide whether you are going to put in the work needed to educate yourself, or whether you will just remain part of the flock:

4 thoughts on “AGENDAS DISGUISED AS CONSPIRACY THEORIES: The ‘Protest Class’ Is By Design”