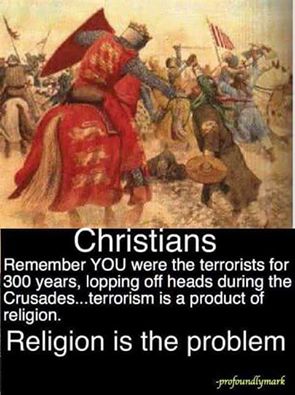 I responded to this by trying to explain to the person who posted it that the meme is propaganda: it gives a false understanding of the Crusades.  I supported my explanation with numerous links giving the true history of Islam and the Crusades.  Predictably, the guy deleted all but my last comment on his thread.  I’ll share that with you at the end of this post.  First, I want you to see what this person deleted.

The first thing we need to understand is that the Crusades were defensive in nature.  They were a response to an Islamic invasion of Europe.  In other words, the Crusades did not start this fire, they merely poured a little water on it.  How do we know this to be true?  By looking at history free from the twisting of those who wish to paint a distorted picture that suits their political agenda.  For example, if the Crusades started it, then how do we explain this?

This happened a long time before the Crusades started.  And while the Battle of Tours stopped Islamic expansion into France, it did not stop Islamic attacks on Europe.  The truth is, since Islam first burst forth out of Arabia, it has waged a Jihad against the West on an average of every fifty years:

[NOTE: the video will not post correctly, but you REALLY need to watch it — please]

Jihad in the West: Muslim Conquests from the 7th to the 21st Centuries 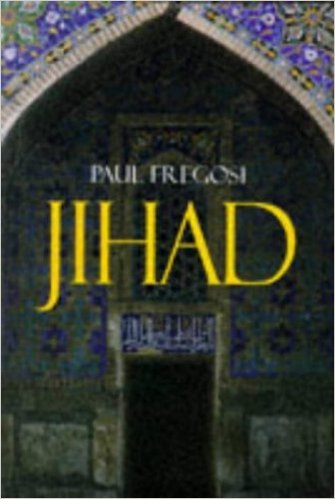 This is a fact!  It is not an ‘interpretation,’ a ‘distortion’ or a falsehood.  It is a matter of historic record that can be verified by consulting these records rather than the history books — which, for the most part, have been written by people who wish to distort the record to further their own political agendas.

The next thing we need to understand is that Islam is what ended Classic Civilization — not the Barbarians!  Islam also started slavery as we know it today.  In fact, Islam was the primary force behind the Viking raids.  The Vikings were looking for slaves to sell to the Muslims.  All of this has been known for more than a hundred years.  It was discovered by a man named Pirenne, who was actually looking at the historic records and not at the history books.  But Pirenne did not have access to modern Archeology.  If he had, it would not have been so easy for people to have dismissed him — as they did.  You see, modern archeology has shown that Pirenne was correct: Islam ended Classic Civilization!

Mohammed & Charlemagne Revisited: The History of a Controversy 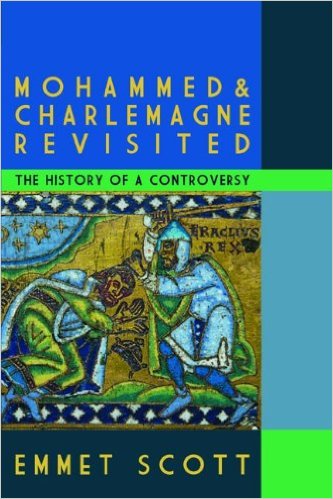 Oh, but it gets even better.  The Bible actually predicts that Islam would be the final worldly empire to come against Israel — not a revived Rome!  When we read the Battle of Gog and Megog in Ezekiel, we find that Ezekiel does not use vague wording.  He uses the ancient names of the peoples and regions who will attack Israel in the last battle.  Today, every last one of the peoples and regions he names is Islamic!  But it goes further.  We think the Bible says the four horsemen ride black, red, white and ‘pale’ horses, but this is not what the actual Greek in Revelation says.  It says the fourth horse is ‘chlōros,’ which means pale green!  Why is this important?  have a look: 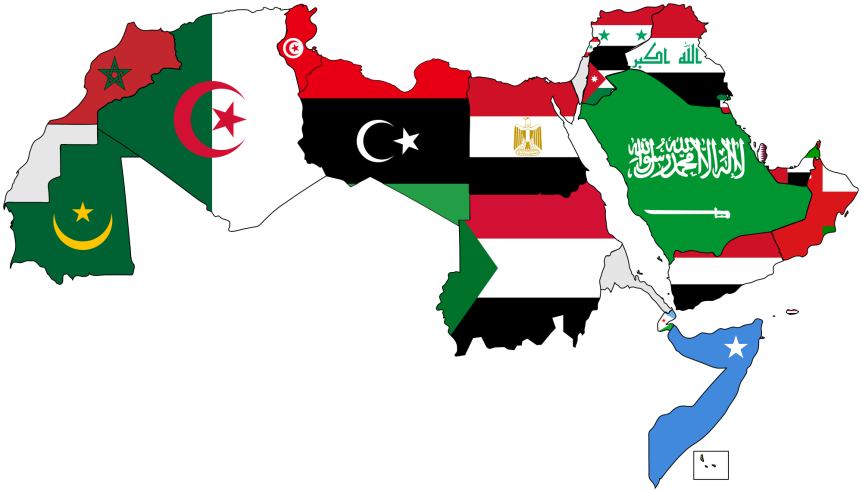 Not bad for a prophecy written more than 750 BC.  They named Israel’s end times enemy and even the colors he would claim.  Oh, and then there is this little tidbit:  Muhammad claimed the number 666 for himself and the Qur’an!

[NOTE: for Christians who have been taught differently, before you dismiss my argument about Islam, I ask that you first read through and consider the understanding of Daniels 70 weeks found on this page.]

Then and only then can we start to see the Crusades for what they actually were, and what they were was a defensive reaction to an offensive attack.  If you still doubt me, this might help:

Seven Myths of the Crusades (Myths of History: A Hackett Series) 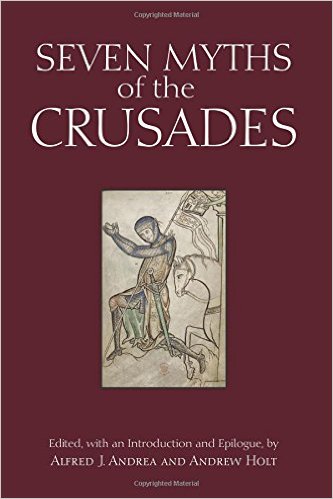 There’s more, but the point should have already been made: while the Crusades saw atrocities committed, they were not offensive wars.  They were the direct result of Islam attacking the West!

Now, back to the Face Book post that started all this.  That person eventually deleted all of my comments, even the one I am about to share with you.  This is because those who push lies cannot afford to let the light of truth enter into their discussion.  If they do, they are exposed for what they are: LIARS!

My last comment to this Face Book person was to agree: religion is a problem!  But then, even Christ said this!  Oh, yes, Jesus spoke out against religion.  The Bible actually condemns religion.  But the problem here is that people have never understood the difference between FAITH and religion.  Faith is a sincere belief and trust in God, the One True God.  Religion is man’s attempt to make and control a god; to create their own path to salvation.  But herein lies the problem: there can be only one True faith.  The question one must ask themselves is this:

Of all the religions claiming to offer the path to salvation in this world, which is the only one that says Salvation is offered as a free gift to all those who will accept by admitting they are a sinner in need of a Savior, and humbling themselves enough to allow their Savior to be their Lord and Master? It isn’t Islam, or Buddhism, or Hinduism or any other religion man has created.  It is only the God of the Bible Who has made this offer.  Everything else involves some sort of work, especially ‘works’ which include forcing others to comply.  In fact, the use of force is one of the surest signs you are dealing with a religion and not the One True Faith.

Now, how — exactly — does one reconcile Faith verses a religion which demands forced obedience?  Or better yet, the consequences of ignoring that conflict?

[NOTE: I no longer think of my voice as anything special.  There was a time when I believed I had something important to say, but not so much these days.  I write now because I feel driven to do so.  Something inside me will not let me rest until I post the pages you just read.  I’d just as soon not bother anymore.  It all seems like no one is listening and I do more harm than good.  So I have come to trust that whatever it is driving me has all this under control.  Personally, I believe it is God, but others may not.  All I ask is that, if anything I write helps you, or you think it might help others in any way, please, share this page.  Re-blog it, share it on FB or send the link to your friends.  So long as you feel it will do more good than harm, then please, use this page however you wish.  Thank you.]

8 thoughts on “There Comes A Point Where Ignorance Becomes Propaganda, And Propaganda Becomes An Open Attack!”