There is no doubt that the fabric of Western society is coming apart.  It doesn’t matter what your personal or political world view is, we all feel it, and we all want to ‘fix’ it.  However, no matter who we elect or what policies we enact, things just keep getting worse.   So, if we know things are bad and getting worse, and we want to ‘fix’ it, why can’t we?  Well, there is no shortage of opinion as to why we can’t fix things, but the answer is simple — and the founders of this nation knew it.  In fact, it is why they succeeded where we are failing.  The answer is… 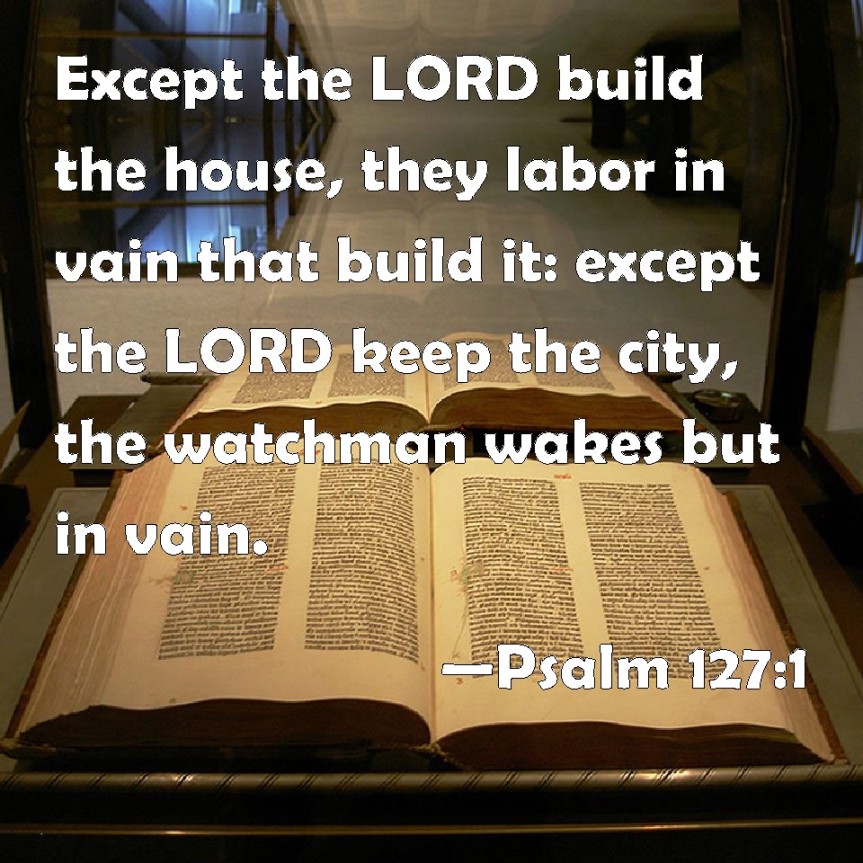 I have read this passage many times, and heard it repeated many more.  However, I did not understand just how wide-sweeping this statement really is — until just recently, that is.  The truth is, whether a person believes or not, this proclamation governs every aspect of our lives.  If you want to be a principled person, you have to have a moral standard or ideal.  Well, unless that moral ideal is God’s Law, then you creating your own law, and no matter how good you may think it is, your efforts will be in vain.  This is because God is Supreme, and He has already established an ever-lasting moral law.  We cannot change that, and any attempt to do so is kicking against the boards.  It is only when we surrender to God’s Law (either Revealed or Natural) that we can establish a lasting moral ideal.  Then, unless we also accept God’s ordinances as to how to live according to His law, we start our fruitless efforts all over again.  The only principles that last are those which the Lord directs.  This is why so many have such difficult lives: they refuse to let the Lord lead them.

The same applies to nations.  When we look to leaders, or political parties or ideologies to ‘save’ us, we are looking to ourselves.  If we look to ourselves, then God can have no part in whatever we are trying to build.  This condemns us to failure.  Now, God is patient, so it may take time to reveal itself, but the failure will come just as surely as the sun will rise tomorrow.  We need but look to the history of socialism for the proof.  Many have tried, convinced that they are the first who has understood how to ‘do it right.’  But no socialist system has lasted more than 7 or 8 decades (a single lifetime).  The same applies to anything which is built on human effort and not on a reliance on and trust in God.

On the other hand, we have the Christian Church.  Early on, it was hunted by Jew and Roman alike.  For the first few centuries of its existence, those in power sought to exterminate Christianity.  Islam and Secular Humanism in all its many forms are still trying to eradicate it today.  But, in spite of all man’s efforts to do so, those who have clung faithfully to the Lord and His teachings have not only survived, they have changed the world.  This applies equally to God’s second (actually first) witness, the Jews.  The world has tried to rid itself of the Jews since before Christ’s time, yet, because they seek human desires and not the will of God, they have failed and God’s people have flourished.  But then, those who are at war with God cannot see this.

Well, our founders were not at war with God.  In fact, they depended upon Him.  They expressly stated that they sought His blessings on their efforts to build a nation according to His laws.  But then, the world would like to deny this, too.  There’s just one problem with denying this truth, and it lies with one of the founders we are told was among the least religious of all: a deist — at best.  Before I prove that the founders understood they had to let the Lord build this nation, let me remind you of what Psalm 127 says about trying to rely on yourself:

Prosperity Comes from the Lord.

127 Unless the Lord builds the house,
They labor in vain who build it;
Unless the Lord guards the city,
The watchman keeps awake in vain.
2 It is vain for you to rise up early,
To [a]retire late,
To eat the bread of [b]painful labors;
For He gives to His beloved even in his sleep.

Now, read these words, and see if you can detect the same agreement in sentiment with Psalm 127:

“The longer I live, the more convincing proofs I see of this truth: ‘that God governs in the affairs of men.’ And if a sparrow cannot fall to the ground without His notice, is it probable that an empire can rise without His aid?”

Do you know who said those words, and when/where he said them?  It was Benjamin Franklin, on the floor of the convention hall during the writing of the U.S. Constitution. You see, Franklin believed in the God of the Bible.  Most of our founders did.  And they also believed that, unless they let the Lord build this new nation, it was as doomed to fail as all the rest before it.  So they trusted in and obeyed the Lord, and the result was the most powerful and prosperous nation the world has ever known.  What’s more, God made us that way in just over a hundred years — a shorter time than any other great nation ever took to become great.  But then, none of that matters today — because we have ‘progressed’ past ‘superstition’ and any need to heed the laws which govern this universe…right?

So, I ask you, how is it that we are going to save ourselves unless we start deferring to the eternal principles which govern this world, and to the Author of those unbreakable laws?

[NOTE: I no longer think of my voice as anything special.  There was a time when I believed I had something important to say, but not so much these days.  I write now because I feel driven to do so.  Something inside me will not let me rest until I post the pages you just read.  I’d just as soon not bother anymore.  It all seems like no one is listening and I do more harm than good.  So I have come to trust that whatever it is driving me has all this under control.  Personally, I believe it is God, but others may not.  All I ask is that, if anything I write helps you, or you think it might help others in any way, please, share this page.  Re-blog it, share it on FB or send the link to your friends.  So long as you feel it will do more good than harm, then please, use this page however you wish.  Thank you.]

7 thoughts on “LESSONS IN SCRIPTURE: This Is Why Things Keep Getting Worse”

Join 309 other followers
Follow The Oil for Your Lamp on WordPress.com