As I continue to study the Progressive movement and its many ideological cousins, I have noticed something that seems to be common to the followers in every branch of its family tree.  They all suffer from a total lack of humility.  What’s more, this lack of humility seems to be connected to an assumption that they are smarter than the average person and that this gives them a ‘superior’ understanding of things.  They then assume that, because they are smarter and have a better understanding, they have a moral obligation to save society from itself – even if it has to be done against the will of the people.  After all, the people are too stupid to know what is best for them.  Now, on the surface, this is enough to really anger those who actually are smarter but who are humble enough not to assume they have some duty to rule the lives of other people.  But when you look closer at the source of this self-imposed delusion, it is actually a sad thing because you realize that the majority of these people are actually scared, lacking in self-esteem and desperately seeking approval from the world.  They just react to their insecurity in a way that – historically – tends to lead to tyranny and mass murder.  Here’s a story that illustrates my point:

Ilan Lukatch, the culture reporter for Channel 2 News, received a question on his Facebook page last week inquiring, “How many people at Channel 2 affiliate with the political right?”

According to The Times of Israel, Lukatch replied, “I will not give you a list of names, for obvious reasons, but there are right-wingers.”

“Of course there are more on the left, but that’s because there’s correlation between one’s IQ and political leaning, and senior figures in the media are generally above average,” he wrote.

I want you to stop and read the pull-quote I posted here again.  Now, ask yourself, does the language Lukatch is using to describe people on the political right sound ‘educated’ to you?  Why does he refer to them as ‘right-wingers,’ but does not say there are more ‘left-wingers?’  But let me try this in another way that – hopefully – will make my point more obvious.  What if it had been a different question and Lukatch had responded something like this:

“I will not give you a list of names, for obvious reasons, but there are a few who aren’t racist haters.”

“Of course there are more tolerant people on the left, but that’s because there’s correlation between one’s IQ and tolerance of others, and senior figures in the media are generally above average,”

Now, don’t dismiss the example I have just given you.  If you are a student of politics and culture, you should have already realized that this is an answer that Lukatch very well might have given to a question about bigots on the Right as compared to the Left.  However, if you are a student of politics and culture, then you probably know that it is the Left that is intolerant of anyone who holds a belief other than their own.  It is doubly ironic that Lukatch is a ‘culture reporter’ who considers himself to be smarter than most, yet he has totally missed his own bias.  He believes the truth to be just the opposite of what it actually is.  This is called bias confirmation and it is a sign of someone who does not understand basic logic, not of a person with a higher level of understanding.

The natural result of this self-delusion is to assume that the majority of people believe the same things they do.  This is a false assumption, but these people tend to live in echo chambers, so they seldom encounter real conservatives or people of faith.  All they ever have to face are the caricatures of conservatives, TEA Party members and Christians that they, themselves create.  This leaves them totally unprepared to deal with these people when they meet them in real life – especially when they discover that reality is nothing like the fantasies they had concocted and argued against.  And when they meet a Conservative, TEA Party member – or worse – a Christian who is polite, well educated and able to defend their beliefs, these self-appointed elite react the only way they know how: they lash out and attack.   If anyone dares to challenge the assumptions of the self-appointed elite, they are immediately stuck with some label that is meant to be derogatory and to undermine any credibility the challenger may have in the eyes of the dupes in the masses.  We need look no farther than President Obama to see this in action.  Anyone who tries to point to his failed policies and explain that history has shown they do not work is immediately labeled a racist and treated as a pariah.  But is this how people with ‘superior intelligence’ actually behave?

I want you to take the nine minutes to watch the video in this link.  You will see how these ‘intellectually superior’ people convince themselves that it is morally justified to kill those who disagree with them.  And remember, the students in this video are the very people who Lukatch is describing as having ‘higher IQ’s.’  They are going to college in California, which places them in the belly of the beast.  So, please, watch the video in this link:

Now consider this: the majority of people in control of our public schools believe they have ‘superior intelligence,’ and that this means they know better how to ‘educate’ our children than we do.  And they are going so far as to claim that our children belong to them, the ‘educated technocrats,’ and not to us, their parents.  This is what Common Core is all about:

Another Reason to Be Worried About Common Core: ‘The Children Belong to All of Us’

“To be sure, there’s always a small voice – and I think these voices get amplified in the midst of these arguments – of people who were never in favor of standards in the first place and never wanted to have any kind of testing or accountability and those voices get amplified,” Reville said, according to CNSNews.com. “But those are a tiny minority.”

See what I mean about these self-appointed elite telling themselves that they know best and that those who oppose them are ‘a tiny minority?’  Once you know what to look for, you will find the same ideas repeated by all of these supposed elites, and they will express these ideas using some variation of the same phrase or phrases.  And, once again, I have to ask: does this level of unthinking uniformity reflect the behavior of a ‘superior intellect?’  Or is it more indicative of someone who has been indoctrinated?  If you answered that it is more indicative of indoctrination, then you will understand the students in the video and the drive for Common Core.  It is to take our children and do this to them: 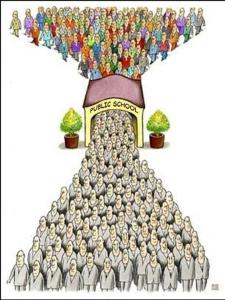 And the fact that Lukatch thinks he and the rest of his fellow automatons are ‘intellectually superior’ is evidence of just how well this process works.

5 thoughts on “INSANITY IN THE HEADLINES: The Perils of Pride and Self-Delusion”