Once again, there are stories in the news that serve to expose the true nature of those who seek to control us.  These stories provide us a peek behind the masks these people wear.  And what we see should bother those of us who know right from wrong.  Here are the stories:

Liberal Activist: Sometimes I Think ‘Abortion Should Be Mandatory’ to Reduce Earth’s Population

I have pointed out that, if Al Gore truly believed the global warming stories he tells, he would not be living the lifestyle he lives.  If Gore is correct, then his carbon foot print far exceeds anything a single person could morally justify.  For him to continue in the lifestyle he lives would be the moral equivalent of everything he accuses the “rich” of being due to their wealth.  Likewise, if the activist in this story truly believed what he is selling, he would have removed himself from the planet.  But notice: while these people are happy to control you and I, and to use the force of government to impose their ideas on us, they conveniently exempt themselves from the effect of their own agenda.  Obamacare would be another example: those who forced it on us exempted themselves and their political allies.

Hypocrisy: it is a good indication of deception, and deception is always on the wrong side of right.

Here is another story that indirectly speaks to the heart of those who support the Statist:

‘SHUT THE F*** UP’: You May Just Start Laughing at How Worked Up Some on the Left Are Over CMA Awards Mocking Obamacare

The people in this story are the same people who would jump on the “anti-bullying” campaigns our government funds.  They would be the first to tell you they are not bigots, racists or “haters.”  Instead, they would tell you they are open-minded and tolerant.  The problem here is that they have fooled themselves.  The problem is that they actually believe the stuff they say about themselves, which is why they can’t hear themselves.  Instead, all they hear is hatred and racism in what is – well, what was once considered good political parity. They have conveniently forgotten that they were saying the same and worse about George Bush just five years ago.  However, in this case, the CMA skit actually has firm basis in truth.  So, which side in this debate is calling the other hateful names, making personal attacks and calling for the opposition to be silenced?  That is the side where force resides, and where there is open use of force, there is tyranny.  Tyranny is always on the wrong side of right.

Then there is this story:

Let me ask you: what sort of person says something like “I am really good at killing people?”  Now, let me ask you another question: what sort of President says such a thing when American citizens and innocent people are among the people he has killed?  There is no way to give Obama the benefit of the doubt here.  By law and by definition, the President has been committing murder.  Even if they are guilty of treason against the United States, so long as they are not in an actual act of armed aggression, the Constitution commands the President to afford the accused due process.  But Obama is not executing his legal duty to insure due process and the rule of law are carried out.  He is assassinating people instead.  And this doesn’t even address the fact that Obama has committed treason.  This is not an opinion, it is by constitutional definition.  Obama has been arming people he knows to be fighting with and for Al Qaeda.  If we are at war with these people, arming them is Treason.  If we are not at war with them, then Obama has violated U.S. and International Law by assassinating people in the name of fighting terrorism.  Either way, Obama is on the wrong side of right.

But there is another story – a story you will not find in the press.  That is the story about the majority of Americans who are willing to sit back and allow all of this to be done in their name.  Now, I understand that one person cannot stop the forces that are working to enslave mankind – not by themselves.  But one person can stop small parts of those forces while – at the same time – providing the world with the encouragement it needs to find the courage to stand up to tyranny:

So, how will we react to tyranny?  Will we do our part?  Will we stand?  Will we make our voices heard and speak out?  And will we pay the cost to do what is right?  Or will we remain silent? 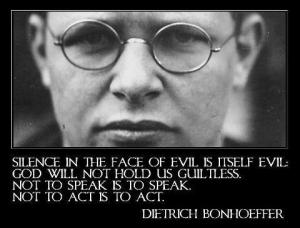 We have a choice.  Chose right over wrong and things will change.  Stay silent and they will still change – only for the worse.

11 thoughts on “PIECES OF THE PUZZLE: Glimpses Behind The Mask Of Statism”