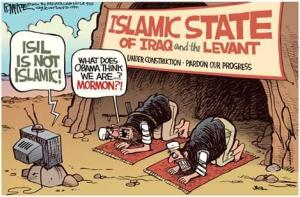 On the surface, this political cartoon is making a valid point: That Obama must know that ISIL is Islamic.  After all, its very name boasts that it is the Islamic State of the Levant.  But the issue at hand goes much deeper than the surface.  One should ask, what is the Levant?  And what role does it play in the larger picture?

Glenn Beck has done a great deal of good work in helping people understand the worldly aspects of this issue in the following story:

Now, if a person believes they don’t need to know the information contained in this story in order to understand what is happening in the world, they are gravely mistaken.  If the reader did not do so, the reader should stop reading this post and read the story in the link I’ve posted above.  Be sure to take the time to watch the video clip in the story.  It is imperative that the reader knows and understands the information in this link, especially that contained in the video clip.

As I have already stated, Glenn Beck does a good job of explaining the human history behind the subject of the Levant.  He has also touched on the modern politics connected to this issue, showing us that the issue is not in the past, but is still driving the events of today.  Unfortunately, however, Beck has either missed or has chosen not to mention the Biblical implications connected to the Levant.  Furthermore, Beck is being far to forgiving in allowing for the possibility that President Obama may not understand the significance of using the term ISIL instead of ISIS.  As importance as the politics may be, it is much more important to understand the Biblical implications running throughout this entire subject.  All of this is connected to Biblical prophecy, and we’d better start looking at world events through from this perspective.

But first, before we look at the Biblical implications, let’s deal with President Obama’s insistence on using the term ISIL. Beck should know better.  We all should.  Obama is openly sending signals of support to his Muslim allies; actions which border on treason.

This is fact: when Obama refers to ISIS as ISIL, he is inferring the name ‘Levant.’  This implies that Israel does not exist (or won’t in the near future).  It is a fact that there is no place for Israel in the Islamic plan for their new Caliphate.  It is a fact that Obama has called for Israel to return to its 1967 borders.  In doing so, Obama has essentially called for the destruction of Israel.  Anyone who understands the strategic and tactical military implications of those borders knows this to be true.  It is also a fact that the Obama Administration refuses to acknowledge Jerusalem as being part of or connected to Israel in any way.  Obama knows all of this (see: ISIS AND ISIL: President Obama is Lying to the American People!).  Therefore, it is reasonable to assume that, when President Obama uses the term ISIL, advocates for the 1967 borders or refuses to connect Jerusalem to Israel, he is openly sending public messages of support to his Muslim allies.

The problem is, the majority of people in the West simply do not know enough about Islam to understand what Obama is doing.  And, if anyone tries to explain Islam to them, Obama can be confident that his willing accomplices in the American media and academia will undermine their efforts.  Finally, if the media are not enough, Obama knows he can simply use the weight of the law to pound his opponents into the ground.  He no longer even needs Congress to pass a law.  The nation has allowed him to assume dictatorial powers on such matters.  All Obama has to do is declare that anything deemed offensive to Muslims is a ‘hate crime,’ and he is free to jail anyone who speaks out against him or his Muslim allies.  The truth is, I’m actually waiting for something like this to happen.  I write now with the full expectation that this blog may one day lead to my imprisonment (if not worse).

Whether or not one wants to accept it or not, the political reality is that Obama knows what he is doing.  He has choosing Islam over the United States (they are mutually exclusive: the two cannot coexist).  What’s more, he has provided witness against himself at least three times: by insisting on the use of the term ISIL, by advocating the 1967 borders, and by refusing to acknowledge Jerusalem as the capital of Israel.  Of all people, Beck should know this (and he should also understand the Biblical principle of three witnesses).  If Obama were Woodrow Wilson and he were pushing his Progressive agenda, I doubt Beck would be so willing to extend him the benefit of the doubt.  But because Beck is bending over backward to ignore the realities of Islam, he has given Obama a pass on what amounts to treason (providing aid and comfort to America’s enemies).

Now that we have addressed the politics surrounding the issue of the Levant, let’s address the Biblical implications.

This part is easy to explain.  The Bible clearly and repeatedly states that the One True God will bless those who bless and support Israel, but He will curse those who curse and attack Israel.  As he is our national leader, by siding with Islam over Israel, President Obama has mocked the One true God and put the United States on the side of God’s enemies.  The Lord keeps His promises.  Hence, unless this nation repents — which means turning away from our current ways and back to the Lord’s ways — the Lord will have no choice but to treat the United States as an enemy.  When Israel and Judah of old openly defied the Lord, He destroyed them — and they were His chosen people.  Anyone who thinks the Lord will deal differently with the United States today is just plain fooling themselves.

For those who want to read it: